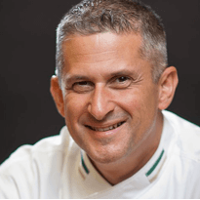 Brad Barnes is director of consulting and industry programs at The Culinary Institute of
America (CIA) in Hyde Park, NY. Chef Barnes is responsible for the oversight of ProChef
Certification and custom professional training, and consults globally with a variety of clients
ranging from educational institutions to hotels, real estate developers, governmental
organizations, food manufacturers, and a variety of both commercial and noncommercial
foodservice providers seeking to drive operational change and excellence.

A 1987 CIA graduate, Chef Barnes has also served as the college’s senior director of
culinary education and senior director of continuing education. Prior to joining the CIA in
2009, he was president of GigaChef, LLC and chef/owner of B&B Solutions in Purchase,
NY; corporate executive chef for the ITB Restaurant Group; and executive chef at Nancy
Allen Rose Catering in Greenwich and The Brass Register at Four Squares in Chattanooga,
TN.

Brad Barnes is co-author of So You Want to Be a Chef?, So You Are a Chef, and The
American Culinary Federation’s Guide to Culinary Certification. He is the former national
Certified Master Chef Committee chair for the American Culinary Federation (ACF) and a
former past chair of the ACF National Certification Commission. He is an ACF-certified
culinary competition judge and certified by the World Association of Chefs Societies as an
international judge.

Chef Barnes is one of 68 Certified Master Chefs (CMC) in the country, and an inductee of
the American Academy of Chefs (AAC), the American Culinary Federation’s honor society.

He has received many honors during his career including the President’s Award (2005),
President’s Medallion (2004), and Hermann G. Rusch Humanitarian Award (2002) from the
ACF. He was twice named Chef of the Year by the Chefs Association of Westchester and
Lower Connecticut (1990 and 1993). Chef Barnes earned two gold medals at the Culinary
Olympics in Germany and the Saint Michel Gold Medal for Pastry Display at the Société
Culinaire Philanthropiqué New York Salon of Culinary Arts. He served as coach and
design director of the ACF’s Team USA culinary Olympic teams in 2000, 2004, and 2008