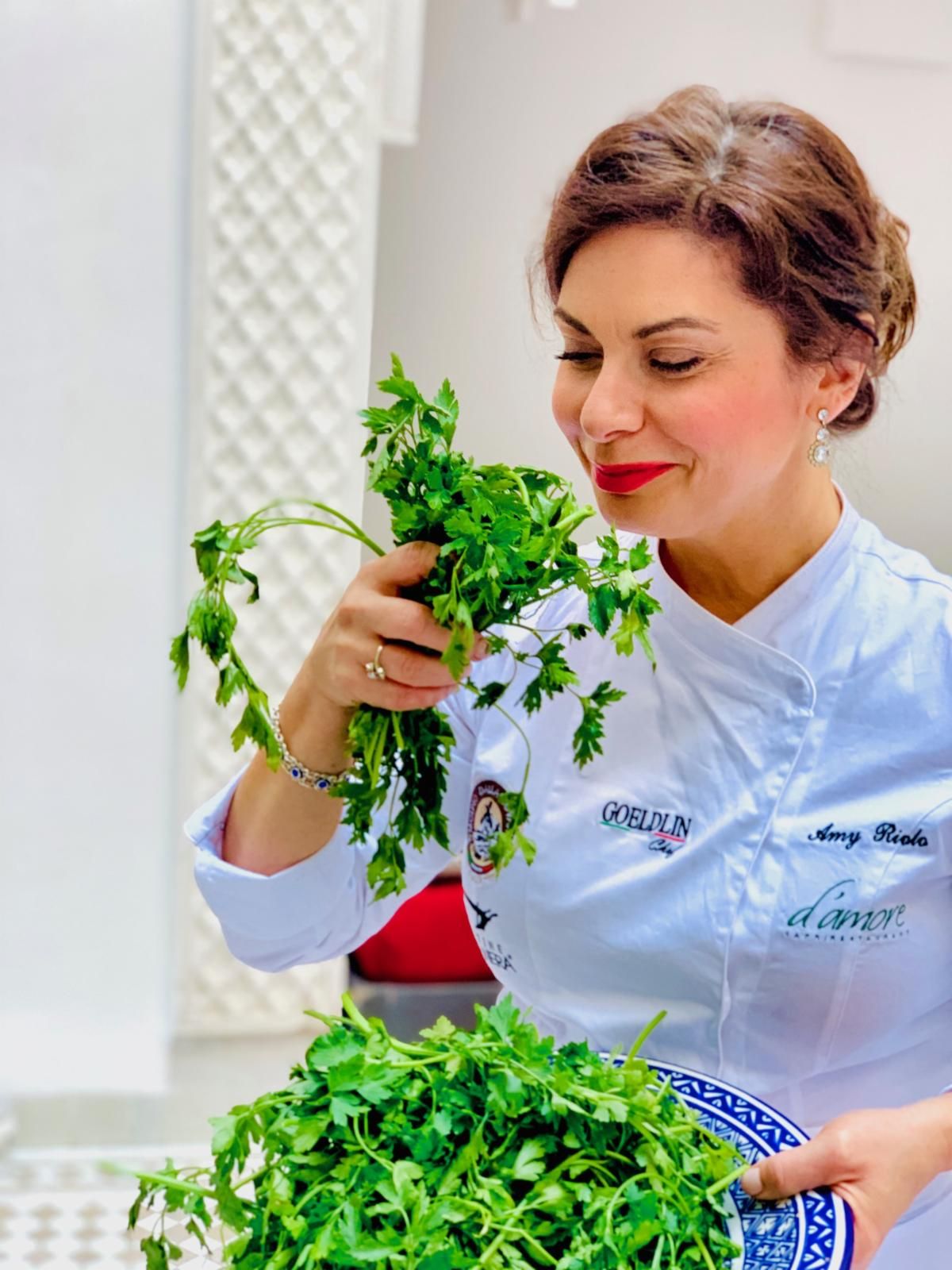 Amy is the brand ambassador for the Maryland University of Integrative Health and the Pizza University and Culinary Arts Center in Maryland as well as Ristorante d’Amore in Capri, Italy. In 2019, she launched her own private label collection of premium Italian imported culinary ingredients called Amy Riolo Selections and include extra-virgin olive oil, balsamic vinegar, and pesto sauce from award-winning artisan companies.

The world-renowned food historian and culinary anthropologist makes frequent appearances on numerous television and radio programs both in the United States and abroad, including Fox TV, ABC, CBS, NBC, The Hallmark Channel, Nile TV, The Travel Channel, Martha Stewart Living Radio, and Abu Dhabi Television. In 2021 Amy filmed a Mediterranean cooking video series for iFIT which will soon be available through their YouTube channel. The award-winning author is currently the host of a chef interview series for Marra Forni and a Wellness Wednesday Podcast for the Maryland University of Integrative Health. She began her on screen career by creating and appearing weekly in cooking videos entitled “Culture of Cuisine” which air on nationally syndicated news shows on 28 different channels across the United States, totaling a reach of over 300 million people. Amy has also worked as an onscreen talent for many international organizations and companies.

As a respected culinary diplomat, Amy has created menus, culinary ceremonies, and educational seminars for diplomats, international chefs, and world leaders, earning her the title “The Cook to the Kings” by a Cairo newspaper in 2008. Known for sharing history, culture, and nutrition through global cuisine as well as simplifying recipes for the home cook, Amy Riolo is one of the world’s foremost authorities on culinary culture. In 2021, she co-founded A.N.I.T.A (Accademia Nazionale Italiana Tradizioni Alimentari/ The National Italian Academy of Food Traditions) to promote sustainable agriculture, legislation, production, and distribution of traditional Italian culinary products. She is also the Co-Founder and Managing Director of ISE, LLC., a marketing company which promotes Italian products abroad, and travels to Italy regularly with the Italian Trade Agency.

Amy began her professional career in the world of fashion. She majored in Apparel and Textile Management at Cornell University, and worked in the clothing sector for a decade before becoming a professional chef and author. While a profile poster dedicated to her culinary achievements is on display in the department of Nutrition at Cornell, she has never abandoned her love of fashion. For this reason, she has collaborated with the Textile Museum in Washington, DC, Emcees events dedicated to fashion at the Italian Embassy, and continues to infuse both passions into her daily life and work. Since 2019, Amy has also been the Master of Ceremonies of the prestigious Italian award Premio Eccellenza Italiana, in Washington, DC which is hosted by Journalist Massimo Lucidi at a concurrent event at the Vatican in Rome.

The “Pen and Ladle Virtuoso” as she was dubbed by an Abu Dhabi newspaper, currently co-leads experiential cuisine and culture tours to Italy with Italian Sensory Experience, and to Morocco and Greece with Indigo Gazelle Tours. Her work has appeared in numerous print media including USA Today, Cooking Light magazine, Elle Magazine, The Washington Post, CNN.com, The Wall Street Journal, Parade Magazine, Gulf News, The Jerusalem Post Magazine, Popular Anthropology Magazine, Ambassador, The Examiner, La Cucina Italiana, The UAE National, and Miradas, as well as hundreds of other national and international newspapers and magazines. In one of her favorite media interviews, Amy was asked by CNN.com to create a fantasy wedding menu for Prince William. She also collaborated with Martha Stewart and her team during her presentation at Metro Cooking DC.

Amy released her highly anticipated 11th book, Italian Recipes for Dummies in April 2022, and her 10th, Mediterranean Lifestyle for Dummies in October 2021. Amy released the second edition of her award-winning, best-selling, Mediterranean Diabetes Cookbook in May 2019. She has written multiple books with The American Diabetes Association and was the National Spokesperson for their 2018 release – the Quick Diabetic Recipes cookbook. In 2018 ,Amy also released Creating a Cookbook: How to Write, Publish and Promote Your Culinary Philosophy on Amazon. Her seventh book, The Italian Diabetes Cookbook was released on January 12, 2016 and was the #1 New Release on Amazon.com. In April 2015, she released The Ultimate Mediterranean Diet Cookbook which earned multiple 5 star reviews on Examiner.com and Amazon and was chosen as one of the “Best Mediterranean Diet Cookbooks” by Women’s Health Magazine in 2021. Her third book, The Mediterranean Diabetes Cookbook, (American Diabetes Association) was released in March 2010, received a starred PW review, won the 2011 Nautilus Book Award and was named “Best. Diabetes. Cookbook. Ever. “ by DiabetesMine.com. Amy’s second book Nile Style; Egyptian Cuisine and Culture (Hippocrene Books) won the World Gourmand Award for "Best Arab Cuisine Book" in the United States and was released in an expanded second edition. Her first book, Arabian Delights; Recipes & Princely Entertaining Ideas from the Arabian Peninsula was chosen as one of the “16 Volumes Worth Staining” by the Washington Post (Capital Books, 2007). She is currently co-writing Diabetes for Dummies (March 2023) with world renowned author, Mediterranean diet expert, and physician Dr. Simon Poole from Cambridge, England.

A highly sought after author, Amy also contributed to The Food Cultures of the World Encyclopedia and co-wrote The Al Tiramisu Restaurant Cookbook: An Elevated Approach to Authentic Italian Cuisine with award-winning chef/restaurateur Luigi Diotaiuti. Amy, an American of Calabrian descent, was awarded the Wise Women 2015 award from The National Organization of Italian American Women and the Milton F. Clogg Award for “Outstanding Achievement in the Culinary Arts”. She is a Culinary Advisor for The Mediterranean Food Alliance and Culinary Editor/Contributor for We The Italians media agency in Rome, Italy.

Many of Amy’s books, recipes, and podcasts are used by universities and corporations to promote cultural pluralism. Amy speaks English, Italian, French, Spanish, conversational Arabic, and is studying Greek. Her culinary diplomacy events include the “Exploring Italy’s Influence on Cuisine and Culture’ in July 2015 which was sponsored by the International Visitors Center of Los Angeles and the Italy-America Chamber of Commerce West. In September 2015, she presented “Culinary Diplomacy: Building Bridges through Global Cuisine” for the Utah Council for Citizen Diplomacy. Amy also chairs the Global Culinary Initiative program for Les Dames d’Escoffier. She is also the author of a noted culinary/cultural blog known for promoting little known facts about global cuisine and the people who create them. Amy has worked with museum curators and events coordinators to create culturally appropriate receptions and culinary components to exhibits.

Amy is a guest speaker/subject matter on cuisine, culture, fashion, the Mediterranean diet and lifestyle, wellness, diabetes-friendly eating, and culinary diplomacy expert for:

The Library of Congress

The US Endocrine Society (Culinary Stage at Annual Conference)

The Embassy of Italy (Washington, DC)

The International Association of Culinary Professionals

The International Visitors Center of LA

The Italy America Chamber of Commerce

The Italian American Museum of LA

The Utah Council for Citizen Diplomacy

The National Museum of African Art

The Embassy of the Arab Republic of Egypt

The Embassy of Yemen

The Culinary Historians of Washington

The Library of Alexandria (Egypt)

as well as many other embassies, museums, and organizations.

As a successful culinary consultant, Amy enjoys developing menus, concepts, action plans, recipes, training seminars and guides for corporations, restaurants, and hotels. She has consulted international business owners on bakeries, cafes, restaurants, and culinary stores where she taught vocational baking classes for thousands of pastry chefs. Amy has taught hundreds of recreational cooking classes in the Washington, DC area. Internationally, Amy had led professional and recreational cooking classes and culinary tours in Italy, Greece, Turkey, Egypt, Morocco, and the UAE, and leads culinary tours. She was also chosen to be the guest chef in the World Bank’s Executive Dining Room during Egyptian Heritage Days where she created 21 different authentic menu items for four hundred people over a course of two days.

In addition to her professional work, Amy spends a great deal of her time supporting philanthropic efforts. She is a member of Cornell Club DC, Les Dames d’Escoffier (Global Culinary Initiative Chair), Slow Food DC, The James Beard Foundation, The National Organization of Italian American Women, and the Culinary Historians of Washington. Amy can often be found mentoring culinary students, teaching children’s cooking classes, and participating on panels for charity events. One of the highlights of her volunteering career was chairing the Baltimore - Luxor -Alexandria Sister City Committee which enabled her to obtain a grant to provide clean drinking water for a village outside of Luxor, Egypt. Amy is based in the Washington, DC area and spends a great deal of time working in the Mediterranean region – predominately Italy, Greece, and Morocco.

"By the time you finish reading one of my cookbooks, attending one of my presentations, classes, or tours, or researching one of my culinary products, you will have a complete understanding not only of the particular cuisine, but of the people, culture, and history that created it along with easy ways to incorporate it into your daily life." ~ Amy Riolo